Flexible Ethernet, or FlexE, originated to solve challenges and inefficiencies in today’s packet and transport networks by providing flexibility and higher capacity, while also enabling the optimal usage of new technologies such as highly flexible coherent optical transmission. The data rates that have been standardized by the IEEE do not always align with the needs of Cloud and Telecom Service Provider networks, and creating new rates can take four or more years to complete. 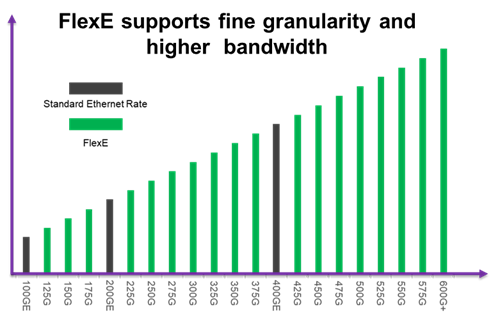 Microsemi was an early contributor to the effort to define FlexE, joining before FlexE was brought into the OIF. Once at the OIF, Microsemi made numerous contributions towards the FlexE Implementation Agreements. In addition to the standardization effort, Microsemi has invested in bringing the key components required to enable the FlexE ecosystem. Microsemi first announced FlexE in the DIGI-G5 OTN Processor, enabling FlexE support on Optical Transport Equipment. The DIGI-G5 integrates a FlexE shim with an OTN encryption engine, allowing combined support for FlexE and layer-1 security.

The META-DX1 family and DIGI-G5 are key components to enable the FlexE ecosystem, and will be used in routers, switches and transport equipment that will be deployed by Cloud and Telecom Service Providers that are taking advantage of the benefits that FlexE provides.