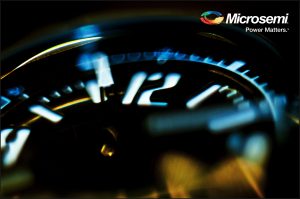 Fundamentally, the 1588 protocol depends on time-stamped frames exchanged between a timing master clock and a timing slave clock, with intermediate boundary and/or transparent clocks to maintain the time accuracy as the 1588 packets traverse the packet network. When coupled with physical layer technologies such as Synchronous Ethernet, IEEE 1588 can also provide robust time alignment, with the addition of phase synchronization. IEEE 1588 is the only standardized terrestrial mechanism today to deliver phase/time via a packet-based network with nanosecond accuracy.

Microsemi systems with 1588 technology include:

Also unique to Microsemi is our miTimePLL™ timing and synchronization technology, a unified IEEE 1588 architecture covering both hardware PLLs and 1588 software, which seamlessly combines with all Microsemi IEEE 1588 technologies.