In a series of coming posts, we’ll write about how leading-edge technology enables a chip scale atomic clock. Please read the series and share your feedback with us.

The Microsemi QUANTUM™ chip scale atomic clock (SA.45s) delivers the accuracy and stability of an atomic clock to portable applications for the first time.

Atomic clocks have enabled a world where ultra-precise timekeeping is now mandatory for communications, navigation, signal processing, and many other applications critical to a modern
functioning society. However, as smaller, lighter, and more energy-efficient—in other words, more portable—versions of these systems have emerged, atomic clocks themselves have not followed the same trends. Why not? There are two reasons: First, legacy atomic clock technologies only scale so small. Second, even if you could make today’s smallest atomic clocks significantly smaller than they are already (about the size of a deck of cards), they would still have serious shortcomings in portable applications, where battery power and ambient temperatures are real issues. 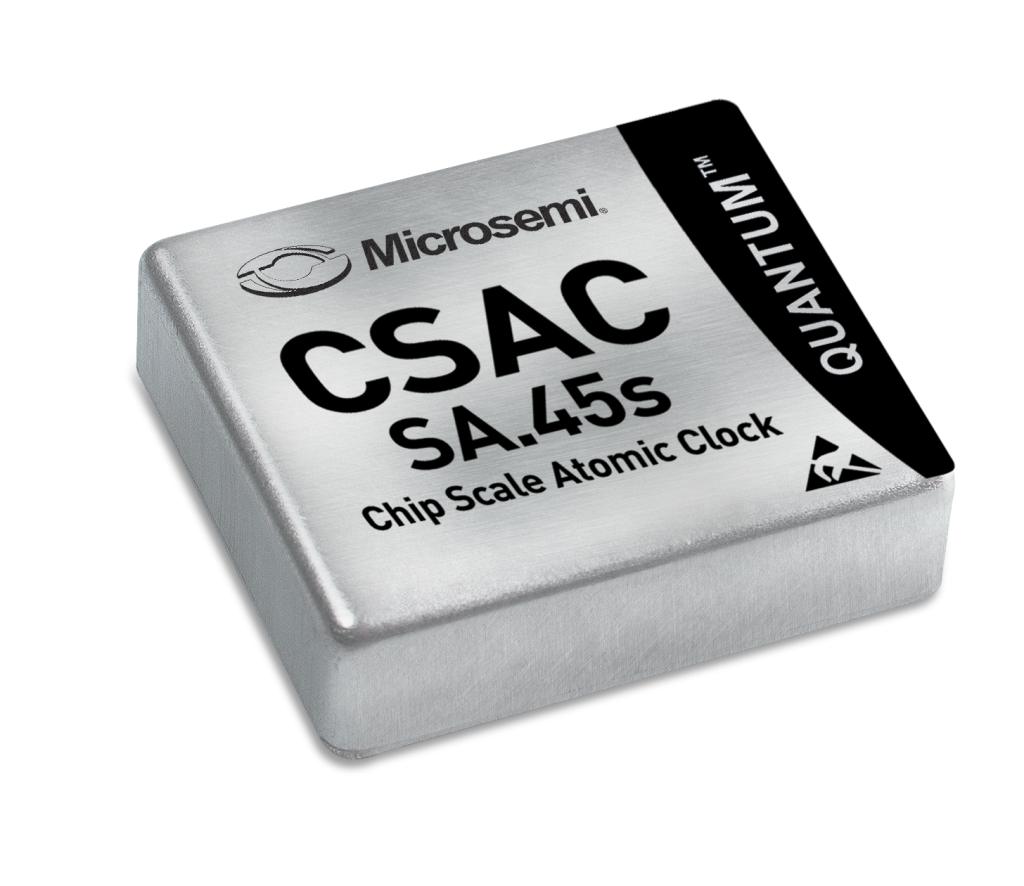 Enter the chip scale atomic clock (CSAC). This is not simply a miniaturized version of a bigger clock, but a reinvention. For example, rather than a cesium tube as a resonance cell, it uses a tiny, hollowed-out silicon cube filled with cesium gas. At one end is a vertical cavity surface-emitting laser (VCSEL) that shines a beam through the gas. At the other end is a photo detector that senses how much light gets through the resonance cell.

With a volume of 16 cm3, the SA.45s is only one-third the size of other atomic clocks that are noted for their small form factor, and it is smaller than many oven-controlled crystal oscillators (OCXOs). While today’s “low-power” atomic clocks consume 5 W in the steady state, the SA.45s CSAC’s power consumption of <120 mW is a 40× improvement—a true breakthrough. Even most OCXOs consume 1.5 W to 2 W steady state, giving the SA.45s a 10×–15× advantage. And as a true atomic clock, the SA.45s has an aging rate of <9E–10/month. Realizing a chip scale atomic clock with such small size and low power consumption required multiple innovations in multiple disciplines, including (among others) semiconductor laser technology, silicon processing, vacuum-packaging, and firmware algorithms. The SA.45s CSAC enables a new class of atomic clock applications defined by portability. These applications include geophysical sensors, backpack IED jammers, backpack military radios, unmanned aerial vehicles (UAVs), and military GPS receivers. It offers longer battery life than previous technologies and maintains high accuracy without GPS or other external time references— all in addition to very small size and weight. Chip scale is a brand new category of atomic clock, both in terms of the profile of applications for which it is suited, and in terms of the technology on which it is based.

Please connect with me on LinkedIn; I welcome your thoughts and comments.