As innovative as the CSAC’s design is, most users will gauge its value by its performance benchmarks. In summary, these include the following:

The CSAC’s specifications for initial accuracy, short-term stability, and aging are all characteristic of atomic clocks—clearly a breakthrough given the SA.45s’s size and weight. And while size and weight have obvious relevance to portability, frequency aging is of the highest importance to applications that may be cut off from GPS timing signals for long periods. These, too, are benefits of the physics package design. The following illustration shows the frequency aging of up to two years for the SA.45s.

In light of these performance benchmarks, the best fit SA.45s applications would be those where a TCXO or OCXO would do any of the following:

Several classes of underwater sensor systems rely on precise timing to be effective. Precise time from GPS is unavailable underwater, and so such sensors have generally relied on OCXOs for stable and accurate time stamping within the sensor.

Oil and gas exploration firms place a grid of geophysical sensors on the ocean floor to help determine likely spots where petroleum deposits are located. The following figure demonstrates an
example of such a grid. 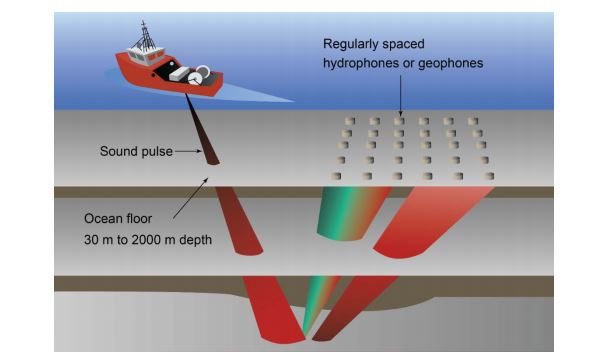 Sensors can be dropped over the side of a ship or laid down by a remotely piloted vehicle. Each sensor typically includes a hydrophone, a geophone, and an OCXO or a TCXO that is used to time stamp the data received by the two other devices. The sensors can be independent or a cable can connect a row of sensors. Once the sensors are in place, a powerful air gun or array of air guns launches a sonic pulse from a ship. The ship moves in a pattern that allows the air gun to be fired from many different angles relative to the sensor grid.

Some of the pulse’s energy reflects off the ocean floor and back to the surface, but the rest penetrates the ocean floor, travels through the layers of rock underneath, and eventually reflects
back to the sensors where it is time-stamped. Once the ship has finished its predetermined pattern, the sensors are retrieved along with the time-stamped data. Because the sonic pulse travels at different speeds in different materials, the “bounce back” times are different based on which materials the pulse traversed. When this timing data is post-processed, it creates a picture of the layers of rock and sediment beneath the ocean floor, showing which locations likely hold oil or gas deposits.

During a typical deployment, sensors can be underwater for several weeks at a time. This is because the ships and crews needed to deploy the sensors, take the measurements, and retrieve the sensors cannot always be optimally scheduled. Bad weather can also cause delays. Throughout the deployment, the OCXOs in the sensors are aging, producing a time-stamping error that varies as the square of the time underwater. The SA.45s’s low aging rate (that can be 1/100th of even a good OCXO) greatly reduces these time-stamping errors.

Batteries are typically the biggest expense in these underwater sensors—and the number of sensors (and also batteries) in a typical grid is constantly increasing. Because the SA.45s consumes one-tenth to one-twentieth the power of an OCXO, it requires much less battery power, which means smaller and lower-cost sensors. Alternatively, sensor manufacturers can choose to retain the existing battery capacity and use the SA.45s to create sensors with much longer mission lives.

Today, most marine geophysical sensors are calibrated to GPS on the deck of the boat before being dropped into the ocean. Because the water at the bottom of the ocean is often just a few degrees above freezing, the sensor can see a temperature change of 30 °C or more from its calibration temperature, causing a shift in frequency and a linear error in time. Some sensors use software models to correct for this error, but the best approach is to minimize the error to begin with. With a temperature coefficient of ±5.0×10–10 over its entire temperature range, the SA.45s can offer a 10× to 1000× improvement over the OCXO or TCXO alternatives typically used for this application.

Today’s IED jammers have power requirements that can only be met by a vehicle’s generator. In addition to lower power consumption, a dismounted jammer would also require key components to be smaller and lighter—exactly the combination of benchmarks on which the SA.45s surpasses an OCXO. Today’s jammers also jam all signals, including friendly force communications. This can be overcome if all the jamming signals are tightly synchronized to allow pre-defined time slots in the signals (“look windows”) where friendly force communications can get through. The SA.45s’s high accuracy, even over wide temperature swings, can enable this level of synchronization, and can maintain it even during a lengthy absence from GPS.

As new, higher-bandwidth waveforms (necessary for the explosion of data and video communications that the services are experiencing) are introduced, the amount of drift that is tolerable will decrease. This means that OCXOs and TCXOs may no longer be suitable reference oscillators. However, the SA.45s’s atomic clock performance will meet these more demanding requirements. Its small size and low power consumption also make it very attractive for man-pack applications and it provides the stability needed to maintain network synchronization in GPS-denied environments.

Using the SA.45s as a time base, military GPS receivers can achieve greatly reduced time to subsequent fix (TTSF) for 24 hours or more. It also becomes possible to operate with only three satellites in view (instead of the usual four), a distinct advantage in many urban settings.

In addition, many UAVs rely on GPS, and the SA.45s CSAC can be disciplined by the 1 pps output from a GPS receiver, thus providing a stable signal that can be used by C4I or even SIGINT payloads. Furthermore, should GPS be lost due to natural interference or jamming, the CSAC provides a stable holdover signal that meets the requirements of even long-endurance missions.

Please connect with me on LinkedIn; I welcome your thoughts and comments.