The central nervous system serves as a framework for characterizing the rapidly evolving global market for electronic hardware. The cloud is the brain, connected devices are receptors, and the transport network is the nerves that connect the devices to the brain. The cloud is realized by data centers, the transport network by fiber and microwave backhaul, and connected devices by a diverse array of electronic equipment, including sensors, actuators, and mobile devices.

There are two megatrends that are having a deep impact on how this market evolves, and so are driving innovation:

· The end of Moore’s law and the related Dennard scaling.
· The exponential growth rate of connected devices. Mobile phones kicked off the first wave of this megatrend and the Internet of Things (IoT) represents the second wave. A new element of the current wave is that these devices, which include cars, are increasingly playing a role in providing safety for the humans they interact with.

Both megatrends have elevated power to a zeroth concern of system designers in all domains. In the data center, the constraint is the fixed amount of power supplied to the data center. In the past, the data center operator could count on Moore’s law and Dennard scaling to provide a doubling of compute capacity of the fixed investment by simply upgrading to the latest generation of processors. At the device level, system power is limited either by batteries (for example, cell phones) or a limited supply such as power over Ethernet. In between, the transport layer and the gateways that feed it are often deployed in fanless enclosures in outdoor environments. In these form factors, available power is not the problem, removal of heat is the problem. The exponential increase in connected devices and the data they produce is driving up the capacity requirements (required power) for both the transport layer and the data centers.

Several solution trends have emerged to address the needs and constraints of this market dynamic. Compute workloads are being pushed from the data center out to the gateways and devices, lowering the power requirements of the data center and transport network while also reducing latency in the system. Heterogeneous compute paradigms (the addition of accelerators and GPUs to the traditional microprocessor based computer platforms) are being deployed in data centers, gateways, and devices to compensate for the loss of gains in processing capability that arose because of Moore’s Law and Dennard scaling. Gateways and devices, which are exposed to physical attacks, are deploying hardware-level security. Finally, the increased exposure of humans to connected devices increasingly requires system designers to consider safety and reliability requirements. 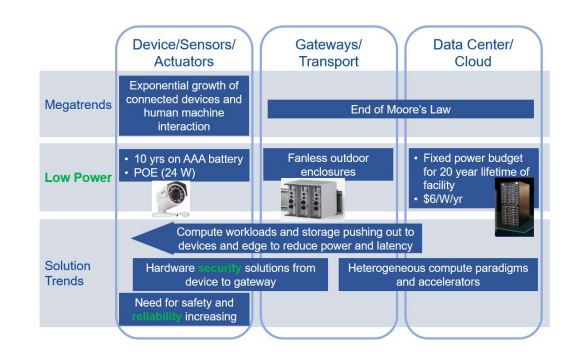 In future posts, we will describe how the new PolarFire FPGA family from Microsemi can help system designers deploy these solution trends, particularly in the transport layer, associated gateways, and connected devices. Built on 28nm Silicon-Oxide-Nitride-Oxide-Silicon (SONOS) technology, the FPGAs provide market-leading reliability, low-static power, and hardware security. The FPGA fabric includes several innovations that contribute to the FPGA’s leading low-power capabilities. The FPGA’s low-power transceivers operate between 1 Gbps and 12.7 Gbps, and are ideally suited for the gateway applications’ bandwidth requirements. Finally, significant enhancements to Microsemi’s market-leading security capabilities have been deployed on the FPGA, including an advanced cryptoprocessor.

Please connect with me here and share your thoughts.