Microsemi’s Gen6 PSE chipset (PD69208M, PD69208T4, and PD69204T4) are in full production and the IEEE802.3bt POE Controller FW coding and validation efforts are moving along towards the highly anticipated ratification of the standard (currently expected September 2018).

The first Microsemi BT FW version was released into the the very first IEEE 802.3bt Plugfest, which was held at the University of New Hampshire IOL Lab in February. Microsemi’s PSE systems were tested against multiple BT PDs (Tier1 OEM’s Access points and PoE Lighting LED controllers as well as candidate bt PD evaluation boards from PD IC vendors). All tested PD’s were successfully powered according to the test protocol. The event was considered a success and allows Microsemi, PoE IC vendors, PoE System vendors, and the Ethernet Alliance PoE members to move forward into the definition of a more elaborated IEEE 802.3bt test plan. While the schedule of the next IEEE 802.3bt certification event/s has not yet been determined, it is anticipated that they would take place late 2018 or early 2019. 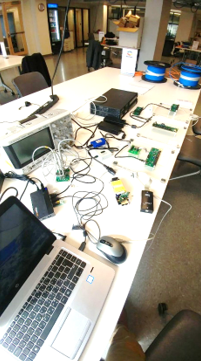