Just a friendly reminder from the Microsemi Frequency and Time Division that daylight saving time for many in the U.S. is this upcoming Sunday morning, March 11, at 2am. Clocks will be adjusted… forward by 1 hour.

That said, have you ever considered how computers and networks in general compensate for these time adjustments? Well, in short, internally, they don’t really have to. The reason is that at the core of computer operating systems and network devices, the time is not the local time that you’re used to seeing—but rather it’s universal time. 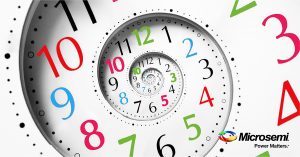 Operating systems synchronize to what is known as Universal Time Coordinated (UTC). UTC is the same worldwide for computer systems and networks, and many other systems as well. Use of UTC allows these systems to be agnostic of where they’re located and properly interoperate in such an interconnected world.

So, where do these computers and systems get UTC time you might wonder? They synchronize to network time servers that serve time in UTC. An example of such a network time server is the Microsemi SyncServer S600. The S600 derives time from the GNSS satellites orbiting the earth, such as GPS, and is accurate to around 15 nanoseconds to UTC as a result.

Once synchronized to the satellites, the S600 responds to requests for time from computers on the network so those systems can accurately correct their clocks to UTC. The net result is time-synchronized computer systems and networks all aligned to UTC.

So how does your computer know the local time? Simple—you told it when you selected a time zone to operate in. Whenever your system displays the time, it’s been automatically adjusted relative to UTC and your selected time zone.

Please connect with me on LinkedIn. I also welcome your thoughts and comments.