We are rounding up our Clock Jitter series by taking a look at what external factors can induce jitter in oscillators, and how they can be effectively compensated for.

We have discussed power supply noise rejection, but what other are the other main causes for concern?  Here we will discuss three major sources of jitter: vibration, thermal noise and crosstalk.

One of the characteristics of quartz is that any movement or change in forces on the crystal can change the frequency.  This is typically represented in datasheets in units of ppm or ppb/g.  For example, a common spec might indicate that a 10 MHz crystal will change approximately 1 ppm/g.  The sensitivity means that when the crystal is exposed to mechanical vibration, it will have a higher phase noise due to these random slight changes in frequency.  This occurs in helicopters, jets, or even in locations that are in close proximity to other mechanical vibrating elements like a cooling fan.

Below are examples of vibration on an oscillator.  In the first image, we see sinusoidal vibration producing spectral lines at ± fv from the carrier.  As these vibrations increase in magnitude, the sidebands will eventually overpower the carrier, causing a collapse.

On the second image we see the effects of random vibration being applied along the x-axis of an oscillator, and how it can severely impact phase noise performance.

Methods most commonly used in order to reduce vibration-induced phase noise can be as simple as isolating the vibration (using rubber, foam, or springs) and more rigid materials (ceramic versus aluminum) to as complicated as active vibration cancellation.  One such method would be that while an oscillator is under vibration, an estimate of a complex-conjugate (same amplitude, opposite phase) signal can be generated from accelerometer signals and used to modulate the oscillator’s output phase in such a way as to suppress or cancel the induced sidebands.

An example of this problem is demonstrated in the figure below.  Here the shaded band between the red and black curves represents the range of different phase noise measurement results of the same oscillator at 100 MHz.  This measurement was made with the same test setup, but changing some components on the PCB.  The results shown below might also have been affected by uncontrolled AM noise leakage or electromagnetic interference (EMI) that is now reduced having selected different components.  This illustrates why in most conversations, thermal noise, EMI and AM noise leakage are grouped together. 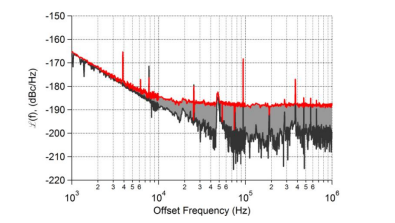 As the feature sizes have been shrinking with process-technology scaling, the spacing between adjacent interconnect wires/traces keeps decreasing in every process technology.  When a signal on one of these wires generates a rising/falling edge, this can have an effect on a neighboring wire, and is generally referred to as crosstalk.  Crosstalk can be due to electric or magnetic field lines interacting between two adjacent lines, and is due to the capacitance and inductance between them.

In capacitive crosstalk, the two wires are denoted as the aggressor (the wire with a signal) and the victim (the wire receiving the noise).  As the edge generated by the aggressor propagates down the line, it will inject current into the victim line through their capacitance.  As the current is injected, the current will see an equal impedance in both the forward and reverse directions, and as a result, the current will split equally, with half travelling forward and half travelling backwards.

In inductive crosstalk, magnetic fields exist as the current travels down the aggressor line.  These B-field lines induce B-field lines around the victim line, which in turn creates current travelling in the opposite direction.  The direction of the induced current creates a negative voltage at the far-end and a positive voltage at the near-end as it flows through the termination impedances.

The effects of crosstalk on an oscillator are largely contributed from the PCB the oscillator is mounted to.  By following proper design guidelines, crosstalk can be minimized/eliminated.  Other methods include inserting buffers, cell resizing, track reassignment of the victim traces and additional wire spacing allocated to victim traces.